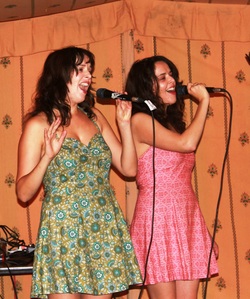 Alanna and Alicia are identical twins and share a uniquely intuitive, creative partnership and a natural musical rapport. They blend folk, jazz and roots in their original songs which have earned them numerous awards. Their lyrics are equal parts heart and humour and showcase their sweet, sibling harmonies. The sisters have charmed audiences with their sparkling performances across Australia from the National Folk Festival, Canberra to Fairbridge, Western Australia.

Sadie is a one forth of The Patch Tags, a folk quartet that started at The Patch Primary School. Sadie is the winner of the 2014 Maldon Minstrel Award.

Kevin will also be supporting Jenny Biddle in her live album session coming up at Selby Folk Club.