September celebrates song at Selby Folk Club. Why? Because it’s good for everyone! Singing makes you feel better and it turns out the reasons are physical. Here’s some science…

Singing has some of the same effects as exercise, like the release of endorphins, which give the singer an overall “lifted” feeling and are associated with stress reduction. It’s also an aerobic activity, meaning it gets more oxygen into the blood for better circulation, which tends to promote a good mood.

In addition, scientists have identified a tiny organ in the ear called the sacculus, which responds to the frequencies created by singing. The response creates an immediate sense of pleasure, regardless of what the singing sounds like.  So it’s just as good for the audience as it is for the performers! 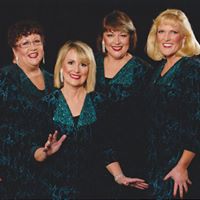 The effervescent Platinum Quartet have entertained crowds at public and private functions all over town. They have been competing at song contests since their first show at the SAI National Competition in Sydney in 2014.

Besides all things Barbershop and bling, they also share a love of animals – and have 6 cats, a dog and a vet between them!

They will be proudly supported by: