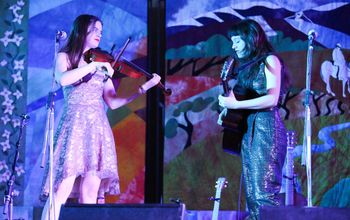 They started busking Appalachian folk songs outside the local veggie shop when they were 11 and 8. The duo have played folk festival stages throughout Australia since 2015, winning the 2017 National Folk Festival Gill Rees Memorial Young Musician’s’ Award and were a 2017 Young Artist Award Winner for Folk Alliance Australia (FAA).

In November 2019 they  released their sophomore album “Your Company” on their own label, Conversations With Trees, which has received rave reviews, and is featuring on major Spotify playlists.

“’Your Company’ is a deep ocean swaying and heaving with dark tales, swirling melodies and astounding songs that float upon a hundred lovely stringed things. Songs filled with beauty, wisdom and magic with some of the sweetest ‘blood harmonies’ you’re likely to hear this side of this century! ” – Khristian Mizzi