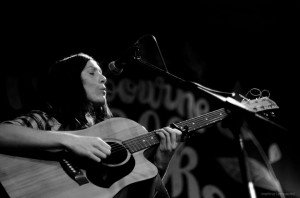 Sal’s authentic and warm stage presence, storytelling and antipodean vocals, along with the captivating musicianship of her close-knit band has seen the five piece win over loyal audiences all over Australia. With over eight years of consistent regional and urban touring, countless festivals and three studio albums behind them, Sal and The  Rolling Wheel create soulful, playful and powerful live shows that inspire both the tapping of toes and the tugging of heartstrings.

Born and bred in the mountain valleys of Victoria, Kimber’s songwriting is stitched with tales of rivers, wild horses, flood, fire and the strength and vulnerability of the human spirit. Sal’s third album “Southern Light”, released in early 2016, featuring the talented Rollin’ Wheel and captured by award winning producer Shane O’Mara, is an expansive, soulful route through country, folk, rock and pop.

On banjo, guitars and vocals, Sal performs solo, duo, trio but most comfortably and most frequently with her talented band ‘The Rollin Wheel’. Sal has been a guest on SBS TV show Rockwiz, has supported the likes of Kasey Chambers and The Waifs, and amongst things is a Bushdance caller. With a charismatic and fun style of calling, Sal can be found teaching the heel and toe in halls all around remote and urban Australia