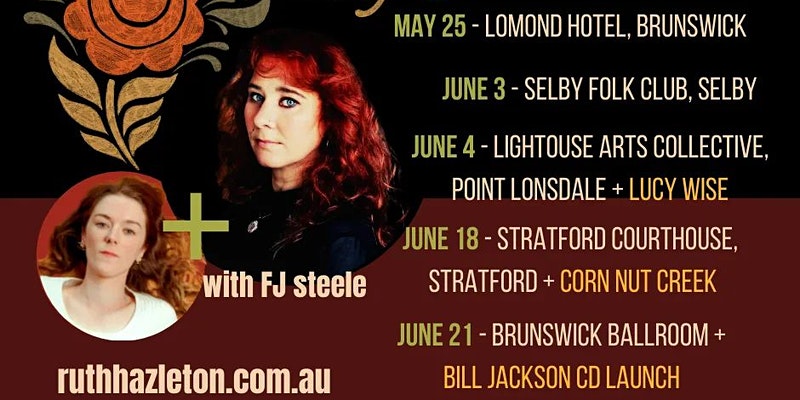 Melbourne-based singer, banjo player, guitarist and songwriter Ruth Hazleton, is an enduring and much loved figure in Australia’s folk music scene, arguably best known for her collaboration with Kate Burke (Trouble in the Kitchen). Their vocal harmonies, exceptional musicianship and unique interpretations of traditional song won them national and international acclaim.

American old-time & Americana music is Ruth’s other enduring musical passion that brought her recognition, initially with Canberra-based band The Horses’s Leotard (you did read that right), and later Dev’lish Mary.

Equipped with an electric guitar tuned to DADGAD and an open-back 5-string banjo, Ruth began her solo journey in 2019, releasing Daisywheel, produced by acclaimed musician and composer Luke Plumb (Shooglenifty). The album was nominated for ‘Best Folk Album 2020’ at the Music Victoria Awards and has been described as “…compelling and intimately fierce” (Living Tradition – UK).

Ruth has toured internationally (the UK, Ireland and America), released eleven studio albums and made guest appearances on many more. She has also been the recipient of numerous awards including ‘Solo Artist of the Year’ at the Australian Folk Music Awards, 2021.